Memory declines with age — things that were once crisp and clear in the mind when you were younger are probably a little foggier now. A certain amount of forgetfulness is normal as we age. However, if you or a loved one is experiencing memory problems that seem to be out of the norm, it may be a condition called mild cognitive impairment. 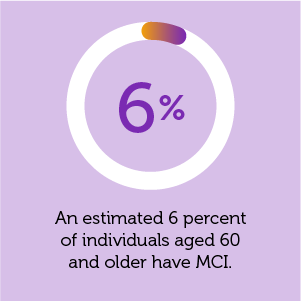 Not all cases of mild cognitive impairment progress to dementia, but MCI can sometimes be caused by the same underlying problems that lead to Alzheimer’s disease and dementia with Lewy bodies. An estimated 6 percent of individuals aged 60 and older have MCI. Read more about MCI. All of the following symptoms are associated with MCI:

It is important to diagnose MCI as early as possible because some cases of MCI may progress to Alzheimer’s disease. There are benefits of early diagnosis, including slowing the progression of memory impairment and saving health care costs.

How Is MCI Diagnosed? 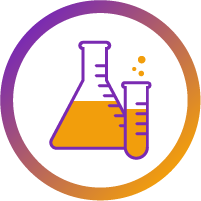 The diagnosis of mild cognitive impairment usually starts when family or friends begin to notice that their loved one is becoming more forgetful, getting lost, or experiencing other symptoms of memory loss.

“We all have certain memory lapses, but when you're starting to see that pattern and that recurrence, that’s when you want to get it checked out,” Dr. Davis said. Acknowledging these memory changes can pave the way to an early diagnosis.

Health care providers can use a variety of tests to help determine if someone has MCI. Initially, a doctor might: If your primary care doctor suspects MCI, they will usually recommend you see a specialist, such as a neuropsychologist. The specialist will likely want to order some brain imaging tests to investigate a possible case of MCI.

You may undergo imaging tests and blood or spinal fluid tests if your doctor suspects MCI. Your doctor may order a [18F]fluorodeoxyglucose-positron emission tomography (FDG-PET) imaging test. This test has been scientifically shown to help identify MCI.

You may also undergo magnetic resonance imaging (MRI). Research shows that combining information from an MRI scan with a PET scan can also identify MCI. Follow-up appointments may be necessary in order to reach a diagnosis.

Since some cases of MCI can develop into Alzheimer’s, a blood or spinal fluid test that identifies biomarkers associated with Alzheimer’s may sometimes be conducted as well.

Research into the underlying biological causes of MCI will help improve the ability to diagnose it. Scientists have identified several physical brain changes associated with MCI, such as: 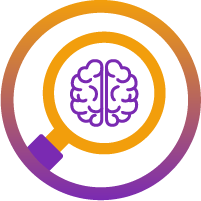 Early diagnosis of mild cognitive impairment is very important, since some cases of MCI may progress to Alzheimer’s. However, not everyone diagnosed with MCI is likely to develop Alzheimer’s disease.

One study of 1,208 people with MCI found that, after two years, 14 percent of participants had reverted back to normal cognition, 51 percent stayed about the same, and 35 percent progressed to dementia. Another research study of over 18,000 people aged 65 or older suggested that the proportion of individuals who progress from MCI to Alzheimer’s is closer to 22 percent.

Early diagnosis and intervention is important for several reasons. First, if someone is diagnosed early, their level of function has the potential to be preserved for a longer period. Additionally, early diagnosis can mean lower health care costs.

The sooner a clinical diagnosis of MCI is confirmed, the sooner proactive steps can be taken to slow MCI progression and declines in cognitive ability. “As soon as you can understand what you're experiencing, most people find a sense of relief. You have something you can focus on,” Dr. Davis said.

Currently, there aren’t any drugs that have been approved by the U.S. Food and Drug Administration (FDA) to treat mild cognitive impairment. However, there are things that can be done to help slow the progression of MCI after an early diagnosis. Some of these include:

Always consult a doctor before taking new supplements or making significant changes to diet or exercise. Learn more about tips to improve your memory health.

The primary benefit of early MCI diagnosis is that it helps identify individuals who are most at risk for dementia. Once a diagnosis is made, a person can get advice, support, and information about what MCI is and how it can lead to Alzheimer’s.

Early diagnosis gives people time to plan ahead. Although diagnosing MCI isn’t always easy, it is important to diagnose as soon as possible to identify any risk for Alzheimer’s and other forms of dementia.

If you or a loved one has MCI, you are not alone. Nearly 74,000 myALZteam members can relate to your experience. Memory problems, including MCI, are not uncommon in older adults. Thankfully, there are support systems available to help you deal with your diagnosis and continue to have a fulfilling life. Support is available for caregivers too.

Have you been diagnosed with mild cognitive impairment? What was your diagnostic process like? Share your experiences in the comments below or on myALZteam.

Jennifer Davis, Ph.D., ABPP-CN is a clinical neuropsychologist specializing in Alzheimer's disease and related disorders. Learn more about her here.

That's something hong I need to check into. Thank you for the suggestion. Bless you, and I do hope this helps you rest better.

July 15, 2021 Update:I wrote this article about two-and-a-half years ago, but last month I truly...
read article >

To determine how you can reduce your medical expenses, myALZteam sat down with Susan Null of...

To determine how you can reduce your medical expenses, myALZteam sat down with Susan Null of...
read article >

Tony Bennett is the most recent celebrity to publicly announce that he was diagnosed with...

Tony Bennett is the most recent celebrity to publicly announce that he was diagnosed with...
read article >

“Caregiving is a marathon, it’s not a sprint … so changing the focus to yourself is necessary to...

“Caregiving is a marathon, it’s not a sprint … so changing the focus to yourself is necessary to...
read article >

To sign up for the next live Q&A and watch past Q&A videos, go to (and bookmark)...

To sign up for the next live Q&A and watch past Q&A videos, go to (and bookmark)...
read article >

As we grow older, distinguishing between what is a sign of normal aging and what may be a sign...

As we grow older, distinguishing between what is a sign of normal aging and what may be a sign...
read article >

According to the Centers for Disease Control and Prevention (CDC), older adults are at higher...

According to the Centers for Disease Control and Prevention (CDC), older adults are at higher...
read article >