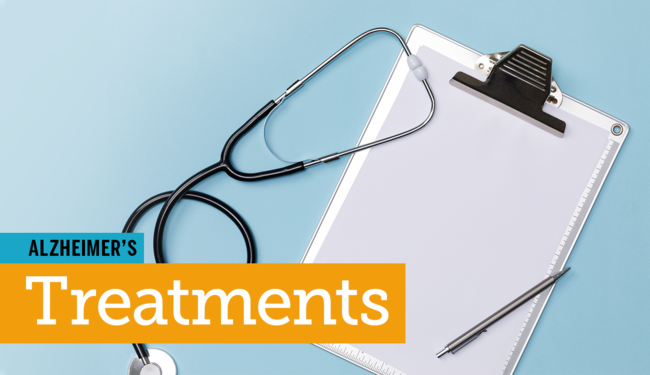 There is at present no cure for Alzheimer’s, and no treatments have been proven to slow or change the course of the disease. However, many people with Alzheimer’s can improve their symptoms and quality of life with effective treatments.

There are now more treatments for Alzheimer’s than ever before.

There are five medications approved by the U.S. Food and Drug Administration to treat dementia in cases of Alzheimer’s disease.

Aricept (Donepezil), Razadyne (Galantamine), and Exelon (Rivastigmine) are indicated for mild to moderate Alzheimer’s symptoms. All three medications are members of a drug class called cholinesterase inhibitors, believed to work by regulating the amount of glutamate – a neurotransmitter – in the brain.

Namenda (Memantine) is an N-methyl-D-aspartate (NMDA) receptor antagonist regulates the amount of glutamate in the brain by a different process. The final drug approved for Alzheimer’s, Namzaric (Donepezil/Memantine), is a combination of medications from both of these classes. Namenda and Namzaric are indicated for moderate to severe Alzheimer’s symptoms.

Nausea, vomiting, loss of appetite, and diarrhea are common symptoms of the five drugs specifically approved to treat Alzheimer’s.

As Alzheimer’s symptoms progress, problematic behaviors such as aggression, wandering, nighttime restlessness, and sleep disturbances often emerge. These behaviors can be dangerous to the person with Alzheimer’s as well as burdensome for caretakers.

Many caretakers try non-drug strategies first before resorting to medications, which may cause side effects and worsen some Alzheimer’s symptoms.

Non-drug strategies to minimize problem behavior can include:

If non-drug strategies fail, some people try medications to soothe their loved one with Alzheimer’s, help them sleep, or prevent dangerous behaviors. There are several classes of drugs that can help reduce problem behaviors in people with Alzheimer’s. Each class of medications can also cause side effects. Work with your loved one’s doctor to determine which medications will be safest and most effective.

Antidepressants are sometimes prescribed to improve depression and anxiety and reduce behavioral problems in those who have Alzheimer’s. Celexa (Citalopram), Cymbalta (Duloxetine), Tofranil (Imipramine), Trazodone, Wellbutrin (Bupropion), and Zoloft (Sertraline) are examples of antidepressants sometimes prescribed for people with Alzheimer’s. Antidepressant side effects differ by class, but the most common include nausea, drowsiness, and weight gain.

Antipsychotics such as Seroquel (Quetiapine), Risperdal (Risperidone), Haldol (Haloperidol), and Abilify (Aripiprazole) may be prescribed to reduce severe psychotic symptoms. Antipsychotics are believed to work by interfering with serotonin receptors in the brain. Antipsychotics can cause serious side effects, including motor symptoms of parkinsonism such as bradykinesia (slowed movement), tremor, loss of balance, and rigidity.

Anticonvulsants may be prescribed to treat seizures or help reduce severe aggression. Anticonvulsants are believed to work by reducing the excitability of brain cells. Depakote (Valproate), Tegretol (Carbamazepine), and Trileptal (Oxcarbazepine) are examples of anticonvulsants that are sometimes prescribed for people with Alzheimer’s. Anticonvulsants can cause drowsiness, dizziness, worsening confusion, and suicidal thoughts or behavior.

Benzodiazepines such as Ativan (Lorazepam) and Klonopin (Clonazepam) are sometimes prescribed short-term to help with agitation. Benzodiazepines can increase confusion and cause dizziness, raising the risk for falls.

Sleeping aids are sometimes used to treat sleep problems in those with Alzheimer’s, but many doctors recommend against this usage. Confusion and fall risk worsens in people with Alzheimer’s when they take sleeping aids such as Ambien (Zolpidem), Lunesta (Eszopiclone), and Sonata (Zaleplon).

Some people try medical marijuana to treat dementia symptoms such as mood problems and sleep disorders. Depending on symptoms, one strain of medical cannabis may provide more benefit than another. High doses of supplementary vitamin E, believed to help protect brain cells, may be prescribed.

Can Exercise Help People With Alzheimer’s?

Exercise has been proven in multiple studies to be highly beneficial for people with Alzheimer’s. Regular exercise can slow the rate of functional decline, improve sleep, mood, appetite, and self-esteem, and reduce the risk for cancer, heart disease, and other illnesses. Exercise can also reduce the risk of falls by improving balance and coordination. Regular exercise does not necessarily mean going to the gym or playing sports. Nearly any physical activity that increases your heart rate and makes you breathe more deeply can provide significant benefits to those with Alzheimer’s.

Read more about the benefits of exercise for people with Alzheimer’s.

Can Diet Help People With Alzheimer’s?

While there is no special diet for Alzheimer’s, proper nutrition and hydration can improve behavioral symptoms and help prevent weight loss.

Eating becomes more difficult for people with Alzheimer’s as the disease progresses. Visual changes, declining physical function, distractibility, and loss of appetite can make mealtimes challenging. By following certain guidelines, caregivers can help keep food appealing and ensure as much independence as possible.

Read more about nutrition for people with Alzheimer’s.

Is there a natural cure for Alzheimer’s?
There is no cure for Alzheimer’s at the present time. Many products are marketed as “natural” or “holistic” cures or treatments for Alzheimer’s, but no natural, alternative treatments have been proven effective in clinical studies to delay or prevent disease progression. It is also important to note that dietary supplements are not tested by the FDA for quality or purity. However, some caretakers say that their loved ones with Alzheimer’s feel better or have fewer problem behaviors when they use various complementary or alternative therapies such as gingko extract, omega-3 fatty acids, coconut oil, huperzine A (an extract of moss), caprylic acid (derived from palm or coconut oil), coenzyme Q10, coral calcium, or tramiprosate (an amino acid derived from seaweed). Since some natural or complementary treatments can interfere with medications or cause their own side effects, it is important to talk to your doctor before trying any alternative treatments.

Can I get assistance paying for Alzheimer’s medications?
If you are facing high costs for Alzheimer’s medication, there are several steps you can take to reduce costs. There are websites such as GoodRx that allow you to check prices for your medications at pharmacies in your area; prices for the same drug can vary significantly by pharmacy or location. Many pharmaceutical companies that make Alzheimer’s drugs offer patient assistance programs that can help connect you with resources. Some people with low income and no insurance may qualify for free medications. Finally, there are multiple nonprofit organizations that provide medications for a reduced cost or for free.

What is the difference between brand-name and generic Alzheimer’s drugs?
Some medications are available as either brand-name or generic products. Generic drugs are almost always less expensive than brand-name drugs. Both products have the same active ingredient at the same dosage. However, some people with Alzheimer’s notice differences between branded drugs and generics in the level of effectiveness, how quickly drugs become active, and how long they stay active between brand and generic medications. Side effects may also differ, or differ in intensity, between generic and brand-name Alzheimer’s medications. Generic versions may also differ between manufacturers. When switching to a generic, or if switching to a different manufacturer, inform your doctor about any changes in effectiveness, duration of effects, or side effects.

I know that this is frustrating bc my 84 y o mom has had them for years. Has the dr. Recommend any meds for that?

posted about 1 month ago

Article written by Kelly Crumrin According to the Centers for Disease Control and Prevention...

Article written by Kelly Crumrin According to the Centers for Disease Control and Prevention...
read article >

Eat healthier. Exercise more. Learn a new skill. Pay off a credit card. Many of us have made...

Eat healthier. Exercise more. Learn a new skill. Pay off a credit card. Many of us have made...
read article >

I am a 75-year-old retired mental health registered nurse. About four years ago I noticed that my...

I am a 75-year-old retired mental health registered nurse. About four years ago I noticed that my...
read article >

This time of the year can be overwhelming with expectations around the holidays, and caring for a...

This time of the year can be overwhelming with expectations around the holidays, and caring for a...
read article >

close
ABOUT ALZHEIMER'S TYPES DIAGNOSIS CAUSES STAGES SYMPTOMS TREATMENTS RESOURCES
New to myALZteam? Learn More
Quick Links
Q+A Treatments A-Z Resources Are you a provider? Crisis
About Us
What is myALZteam? Partner with us Terms of service Press/News Privacy policy Cookie policy
Help With This Site
Getting started FAQ Community guidelines Contact us