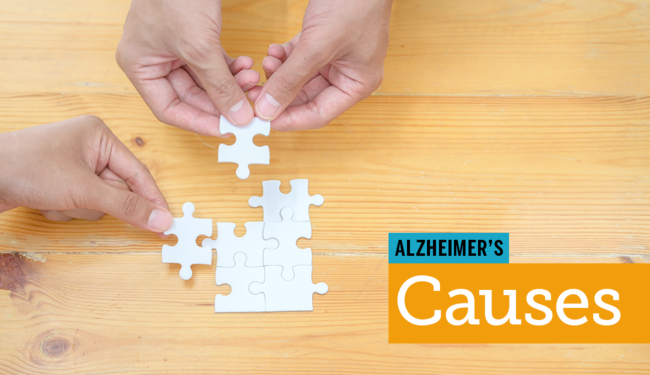 It is important to note that while science is good at finding correlations – apparent relationships – between factors and disease, correlation does not prove that the factor causes the disease. Many risk factors for Alzheimer’s have been identified and are being studied, but none have been pinpointed as the cause of Alzheimer’s.

In less than 5 percent of Alzheimer’s cases, the disease is entirely due to specific genes inherited directly from their parents. If a parent has this genetic variant, they have a 50 percent chance of passing it to their child. Familial Alzheimer’s is also known as early-onset or younger-onset Alzheimer’s because it develops before age 65, sometimes as early as the 30s. People with a history of familial Alzheimer’s can ask their doctor for a genetic test to determine whether they have the deterministic gene that leads to developing the condition.

The vast majority of people with Alzheimer’s have no family history of Alzheimer’s but may have genetic factors that predispose them for developing Alzheimer’s in the presence of other, environmental factors. For instance, certain genes may make it harder for a person to clear toxins from the brain after exposure. Research to better understand hereditary predisposition for Alzheimer’s is ongoing.

Ethnicity may influence Alzheimer’s predisposition. Studies differ in their findings, but people of African and Latino descent may be more likely to develop Alzheimer’s than people of Asian and European descent. However, those of European and Asian descent seemed to have higher rates of mortality due to Alzheimer’s than those of other ethnic backgrounds.

Multiple studies have found a correlation between head injuries and later development of Alzheimer’s.

Research shows evidence that living in areas with poor air quality due to air pollution may speed up cognitive decline that leads to dementia.

Studies involving the brains of people who died from Alzheimer’s found evidence that common viruses, especially herpes viruses, may be connected to Alzheimer’s in some way. More research is needed to clarify this connection and determine whether the viruses contribute to the development of the disease.

Conditions that damage the cardiovascular system (heart and blood vessels) are thought to raise the risk for developing Alzheimer’s. Many of these conditions, including hypertension (high blood pressure), high cholesterol, heart disease, diabetes, and stroke, are strongly influenced by lifestyle. Thus, smoking cigarettes, eating a diet high in calories, fat, carbohydrates, and salt and leading a sedentary lifestyle with little physical activity may contribute to a higher risk for Alzheimer’s.

Ongoing studies are examining the role of aspartame, an artificial sweetener marketed as NutraSweet and Equal and added to many food products, in possibly raising the risk for developing Alzheimer’s.

What Does NOT Cause Alzheimer's?

Many substances and objects were thought at one time to increase the risk for developing Alzheimer’s. The following have been thoroughly studied as potential risk factors, and no link with Alzheimer’s has ever been proven:

Can Alzheimer’s be prevented?
Since we do not yet know what causes some people to develop Alzheimer’s, there is no certain way to avoid getting the disease. Some risk factors, including genetic predisposition, are beyond anyone’s control.

If you are concerned that you may have a high risk for developing Alzheimer’s, focus on lowering your risk by changing the factors within your control. Stop smoking. Focus your diet on fresh vegetables and fruit, whole grains, legumes such as beans and lentils, fish, low-fat dairy products, and sources of healthy unsaturated fats such as olive oil and nuts. Increase your activity level and try to get some daily exercise. These changes may or may not help prevent Alzheimer’s, but they are likely to improve your overall health.

Reduce the risk for traumatic brain injuries by always wearing your seat belt, wearing helmets when riding motorcycles or bicycles, never driving under the influence of alcohol or drugs, and keeping pathways clear to prevent falls.

Kelly Crumrin is a senior editor at MyHealthTeam and leads the creation of content that educates and empowers people with chronic illnesses. Learn more about her here.